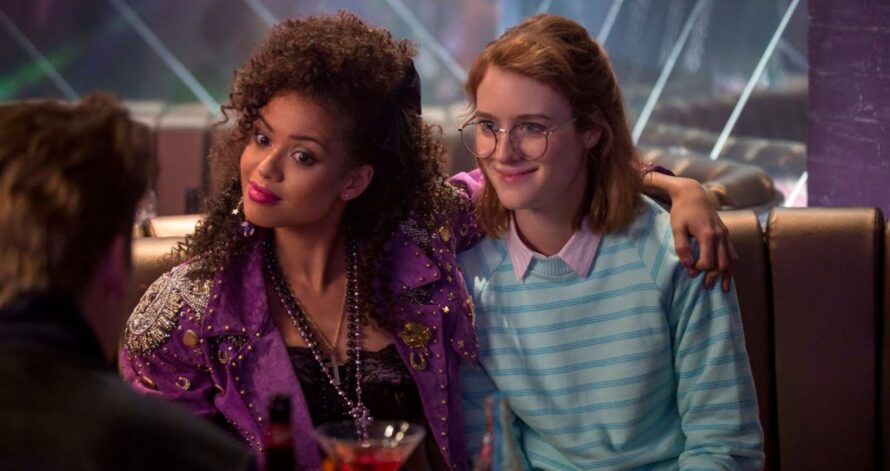 Black Mirror: Series 3 is remarkably well-made. Ever since its 2011 premiere, showrunner Charlie Brooker has been gleefully dramatising and satirising mankind’s encroaching technological empowerment as debilitating fetishes, or grand traps. He seems to delight in misery and misanthropy.

After the concentrated pastel nightmare fuel of Nosedive, the pant-filling terror of Playtest and the cruel nihlistic vigilantism and twisted moral code of Shut Up and Dance – the real treat of series 3 is San Junipero. And it’s an instant classic – in much the same way that Breaking Bad‘s One Minute, or The West Wing‘s Two Cathedrals is.

1987: a uncomfortable milquetoast young woman, Yorkie (Mackenzie Davis), visits the “party town” of San Junipero. Hundreds of people out for a good time, looking to connect. And Yorkie meets Kelly (Gugu Mbatha-Raw, delightful and wise by turns). They strike up a friendship that spans decades.

It’s a beautiful, empowering story and luxuriously told – aided immeasurably by a superb creative team.The Netflix production money is being put to good use. The episode gleams with affirming pinks, greens, vulnerable blues, sodium orange and shadow. The world building is economic. A technical tour-de-force rich in detail, from the cheerful anachronisms and mannerisms that give away clues and the double-bladed, multi-layered dialogue.

And oh, heavens – the soundtrack choices. Someone hack into Brooker’s Spotify account, stat.

Despite its affirming and largely wholesome nature, it still doesn’t stop you waiting for Brooker to pull the rug out from under our feet with a nasty surprise, as the show is wont to do to its protagonists. Almost all of them are left irreparably broken, desperate, connected but alone.

Well. He does, and he doesn’t. Brooker conjures a guarded, achingly authentic and emotionally robust queer fantasy. It is a marvellous love story – laced with sadness, guilt and affirming discovery, and does not depict technology in a cynical, evil, dark, black way.

The first twist of the hour is that San Junipero is a virtual reality, serving elderly people with nostalgia therapy. It also, at the end of their lives, allows people to pass their consciousness into cyberspace to live out eternity in this virtual world. As a technological replacement for religion’s promises to mankind, there’s massive opportunity for discussion and debate.

This machine heaven appears to be entirely benevolent, although doesn’t come without its darkness – Brooker spends a little time with people who have lost their capacity for joy, creativity and stimuli in this alternate universe. Mental health may be a major problem in San Junipero.

However, it’s a Black Mirror episode that aches in the deep connections possible from modern digital natives – so many of us have gotten to know, clash with, counsel, support and love people entirely online. It’s right and proper that those connections be depicted in a fashion in which supports their own best selves and values.

The second twist – when Yorkie and Kelly meet in the real world, I will not reveal. But it’s consequences remain one of those completely virtuous and original TV storytelling ideas that I can’t believe hasn’t been grasped this cleverly. It struck me dumb – with lots and lots of hot, wet, happy tears.

Also, watch the mid-credits scenes. At no point has Heaven Is a Place On Earth by Belinda Carlisle ever, ever been so welcome. I felt my heart was going to float out of my chest – both beaming and crying like an overjoyed idiot.

“It’s uh.. got different endings. Depending on if you are in one or two player.” – We’re social animals. Damn straight it does.