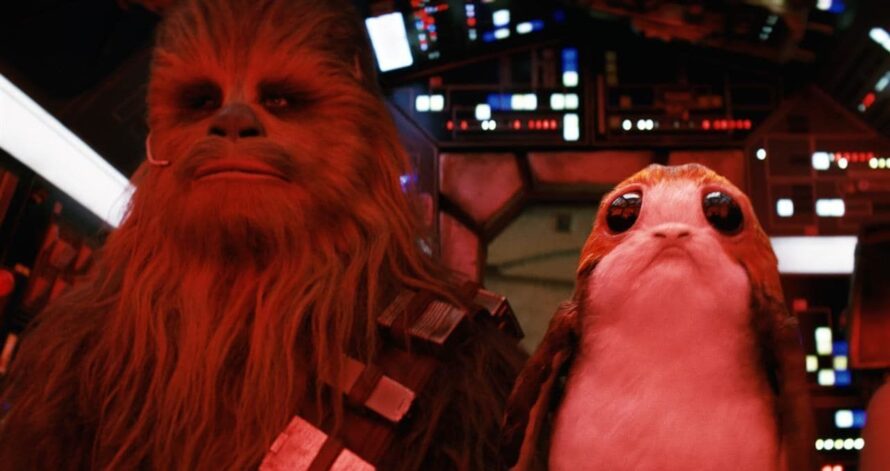 The Last Jedi may have been the Star Wars film I really wanted but didn’t know I did until I saw it. Which, on revisiting it on Blu-ray for the Voice, is one of the best compliments I can give it.

It remains a complex, tersely written and beautifully performed space opera – which pulls off the achingly sweet feeling of making what is old, familiar, shop-worn and comfortable brand new again. Aware of its past, critical of it, but without the whiff of a thesis paper. The Last Jedi is a first-class adventure story full of heroes, villains, clockwork plots, revelation and for a Disney concoction – a heart burning with revolution.

Following almost immediately from The Force Awakens, Supreme Leader Snoke (Andy Serkis), his powerful apprentice Kylo Ren (Adam Driver) and their fash First Order forces are tracking down and snuffing out an ever-shrinking band of Resistance heroes. It is a desperate time for hope in the galaxy. Rey (Daisy Ridley) has sought out the legendary, self-exiled Jedi Master Luke Skywalker (Mark Hamill), to seek his help in fighting this ruthless evil. It doesn’t go well.

There’s nothing quite like a good “how on earth are they getting out of this one” story, not having any solid answers, and watching the characters seemingly improvise; bereft of dramatic irony. The high stakes mean you’re drawn along with war hero and dashing blunt instrument Poe Dameron (Oscar Isacc) clashing with General Leia’s (the much-missed Carrie Fisher) experience and Admiral Holdo (Laura Dern) sticking to a “loose lips sink ships” strategy. Meanwhile, defected stormtrooper Finn (John Boyega) and mechanic Rose (Kelly Marie Tran) conjure a secret mission to recruit a codebreaker on a nearby planet, which caters exclusively to the galaxy’s decadent and hated. The story is by and large paced beautifully – plots springing to life and folding away with the light touch and will of a plate-spinner.

The doom-laden plot doesn’t mean it’s a gloomy, downtrodden picture. This is beautiful stuff – moving with the composure of a living painting – with enjoyable attention to detail on battle plans, feints, tactics, chases and sacrifice. It takes the time to experience each key moment and revelation along with the characters – from delight to devastation. It climaxes brilliantly with an extraordinary showdown with Skywalker’s former pupil – the final gasp of the hero we knew as youngsters thirty years ago. The subsequent onslaught reducing the rock-salt surface to a crimson, bloody smear is pacifistic resistance imagery at its most grand.

Themes of hope, finding help among the many and the refusal to give up in the face of crushing odds are simultaneously timely and timeless. And my god, there’s a lot of battle-hardened, capable women leading the charge in the galaxy. No wonder the American alt-right hated it. Pity them, they’re missing out on a ripping great yarn.

The Last Jedi is a sequel that is content to casually toss away and destroy symbols of the past – Darth Vader’s lightsaber, the arrogance of the past, key lessons of failure and endurance – and forge its own new set of myths. Maybe this is by arch-capitalist design – Disney looking to expand their $4bn brand – but equally, there’s something cheerfully subversive going on. The Star Wars universe is feeling the first taste of democratisation.

By the end, anyone can be a rebel, nobody monopolises the Force and everyone can stand up and be counted. When John Williams soaring, familiar credits music sees us out, everything’s changed.