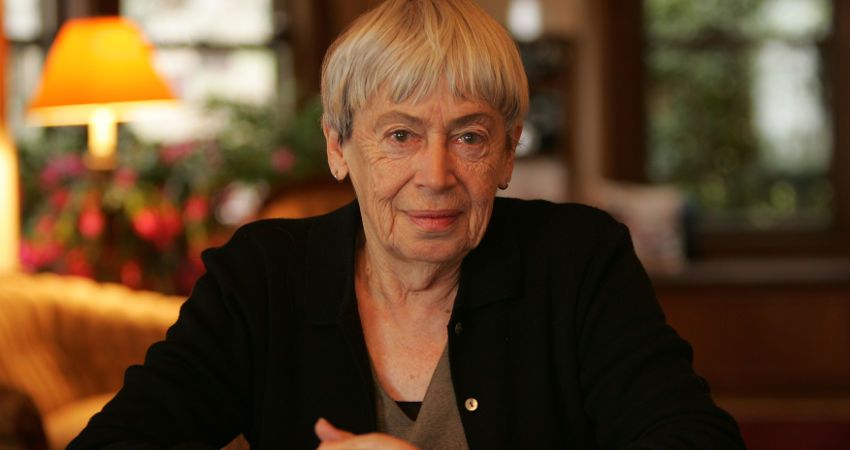 I generally do not weep when my heroes die. But I do for Ursula K. Le Guin, speculative fiction writer, poet, scholar and genius, who left us at the age of 88. Not all tears are wrought of misery – mine are of joy that her work, writing, wisdom was shared to me, enriched me, and sadness that it has been silenced.

All over the world, people mourn. Her readers know what has happened, what the world has lost and it wounds us – the archmage of words will speak no more. Like her fictional world of Earthsea in The Farthest Shore – the world has been ruptured, and colour, knowledge, and magic seeps away.

Le Guin left behind a vast, varied body of work and wisdom, from volumes of luscious, simply-hewn poetry, dozens of short stories brimming with ideas to challenging, robust and politically charged cycles of speculative fantasy and essays, so many essays, on well-examined life. She is widely celebrated in specialist literature; winning lifetime-achievement awards for fiction, including the Grand Master award from the Science Fiction & Fantasy Writers of America.

She’d treat her readers with compassion, shared kinship and solidarity. Her fans locked her away in their hearts as a keepsake, counsellor and stern exacting comrade – the best teacher they never had at school. There are few better sources to nourish the uncolonised mind.

As fiction writer, there is a glorious depth – a creator of worlds, social anthropology and emphasis on story and written craft which is second to none. We all know there is a curious telepathy that occurs between attentive reader and skilled storyteller, and none exemplified that participatory bond more for me.

Her worlds come fully-formed, gently sketched with details from an anthropologist’s dreams, requiring simultaneous active engagement and subtle guidance. Her stories are simpler, but their telling challenges readers in wide, varying ways. Her classic The Dispossessed – an exploration of anarchism and revolutionary societies – reveals itself in a utopian kaleidoscope. It is told in extracts from an ethnographer’s notebook, ranging from patchwork alien myths to matter-of-fact journals. Her characters take root in our minds, burrowing in space where they live, breathe and struggle.

Such struggles remain to this day, against gender oppression, power, domination, and the enforcement of ideology. Like all activists, they live through crises of conscience, motivation, and failure. They teach us that while adult life has its wonder, splendor, joy and innate richness, that it never stops being hard, and that we are duty bound to continue, endure struggle, share and pass on what we learn from it. They’re works for all of us.

She would combine her great literary artistry to complex, often gloriously personal subjects in short, evocative and playful essays – written for and to be read as pleasure. Her performance piece Introducing Myself is among her best – grappling gender, sex, literary devices, punctuation, Hemingway and Nazi showjumpers. It is equal parts stand-up comedy and sparring partner for those who read for pleasure. It drips with sparkling wisdom, laughter, play and perception.

Despite her accomplishments – there remains a crucial intimacy. Her writings act as a favour shared among friends – on finding out that an acquaintance reads Le Guin, it acts as a shibboleth. Someone who has shared her work to another says “this person can be trusted” in reasoning with human justice, imagination and the mysterious power of what really, really good stories, invention and the right words delivered in the right way mean to all of us.

Fiercely political, Le Guin never shied from challenge, nor suffered foolishness. Delivering the 1983 commencement address at Mills College – she advocated equality for all.

“What I hope for you is that you live there not as prisoners, ashamed of being women, consenting captives of a psychopathic social system, but as natives. That you will be at home there, keep house there, be your own mistress, with a room of your own. That you will do your work there, whatever you’re good at, art or science or tech or running a company or sweeping under the beds, and when they tell you that it’s second-class work because a woman is doing it, I hope you tell them to go to hell and while they’re going to give you equal pay for equal time. I hope you live without the need to dominate, and without the need to be dominated.”

Her speech at the National Book Awards throws down further challenges to us as revolutionaries:

“Books aren’t just commodities; the profit motive is often in conflict with the aims of art. We live in capitalism, its power seems inescapable – but then, so did the divine right of kings. Any human power can be resisted and changed by human beings. Resistance and change often begin in art. Very often in our art, the art of words.”

I commend her to you comrades all. Grab a book, find a comfortable chair and godspeed. Let’s talk when you get back.